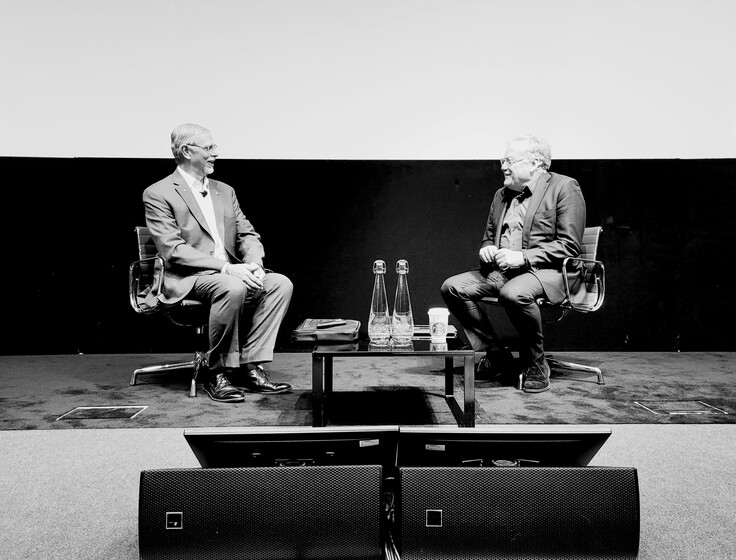 Adding to the growing sense of occasion around COP26, the Royal Institute for British Architects (RIBA) recently hosted the two-day ‘Built Environment Summit’ (28-29 Oct), to discuss the role of the built environment in the climate emergency. Through a combination of in-person and virtual discussions, the global summit brought together architects, engineers, planners, developers, and other built environment professionals. Each was there with the intention of better understanding their respective roles in making positive change to tackle the climate crisis and reduce carbon emissions, of which the industry contributes almost 40% globally.

Our founding director, Patrick Bellew, was asked to contribute to the summit to share his expertise on retrofitting and the importance of it within the sustainable built environment discussion. Speaking alongside Quinn Evans Architects’ director of sustainability, Carl Elefante, in a session led by Carbon Co-op’s Jonathan Atkinson, Patrick was asked to provide insights into the benefits, opportunities and challenges of retrofitting.

Recent advancements in technology, materials and knowledge systems have pushed retrofit to the forefront of the agenda in the race to decarbonise how we live, work, and build. It seeks to reduce the carbon footprint of the built environment as a whole by focusing on how the footprint of existing buildings can be modified and made more sustainable, thus contributing to the overall goal of net-zero and reducing the need for new builds. As Carl was quick to point out on stage: “The greenest buildings are the ones that have already been built,” and so this is where we should be focusing our attention and resource. The embodied carbon that manifests in existing buildings must stay locked up, says Carl, so that latent greenhouse gases are not released upon their demolition and replacement. The short- and medium-term success of our collective work in reducing emissions depends on our ability to retrofit existing buildings, rather than constructing them anew.

Taking the audience on a select tour of Atelier Ten’s extensive portfolio of retrofit projects to exemplify Carl’s arguments, Patrick was keen to stress that the key to retrofitting buildings is creativity. The success of the approach as a viable – and powerful – solution, not just for climate issues, but for retaining the built heritage that so much of our urban cultures are framed around, is entirely contingent on the ability for its practitioners to turn problems into solutions.

Using Atelier Ten’s heritage projects at London’s National Theatre and Oxford’s Ashmolean Museum as case studies on the benefits of retrofitting, Patrick explained how, the installation of contemporary building services within historic buildings needs to be carefully considered to protect both the building and its setting. By integrating building services vertically rather than horizontally, the architectural identity of the building can be preserved while enabling it to perform more efficiently.

In the USA, at Yale’s iconic Art and Architecture Building, where Patrick used to teach, this creativity was harnessed by replacing the building’s existing glazing with a new high-performance façade while retaining over 90% of the original structure. This approach reduced the peak solar load while providing extensive daylight, which in turn significantly reduces electricity costs and connects building users to the outdoors.

Finally, London’s Space House, designed by Richard Seifert, is a 1960s listed heritage building which Atelier Ten is currently in the process of retrofitting in collaboration with Squire and Partners. New methods of ventilation, new materials for glazing, and an energy shift from oil to electric, have each ensured that this iconic central London landmark maintains its cultural prestige. As Patrick told the crowd in the room and online, “We’ve taken all of the innovations and technology now available for a new build, and installed them into an old one.”

As a final parting thought, Carl, Jonathan and Patrick all agree that in some instances, it is necessary to take a building down, and the political, technical and financial barriers to retrofitting practices ensure that this still happens more than it should. However, if we are to really start making a positive impact on the environmental footprint of the built environment, then retrofitting existing buildings must be considered a vital part of the decarbonisation process. It will require creativity, and an aptitude for problem-solving, to ensure that its impact continues to grow.