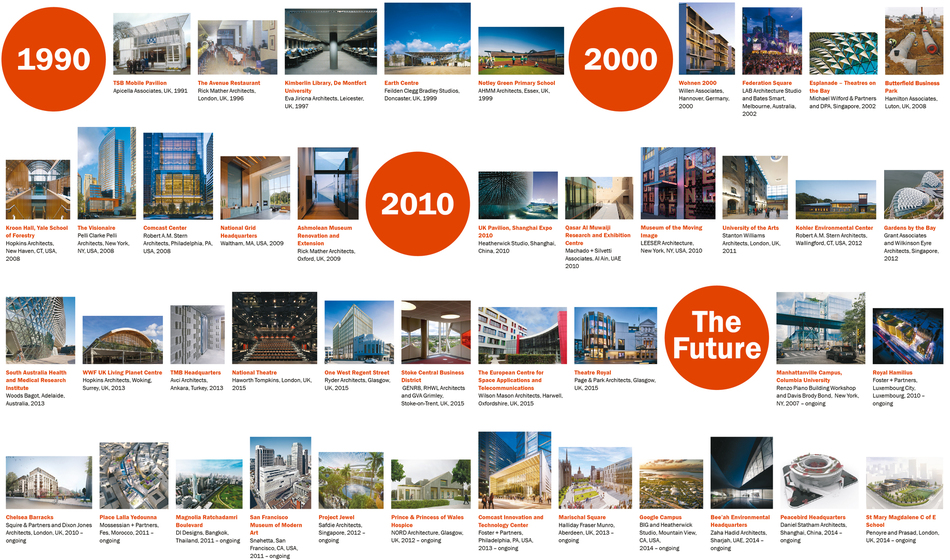 Since 1990 Atelier Ten has grown from a fledgling London practice to a global thought leader in environmental design.

The notion of ‘the environment’ first sprang from an increase in back-to-nature thinking in the 1960s. Before that, engineers in construction were more concerned with regulations than energy consumption and waste.

As the idea of energy efficiency emerged, fulfilling the Modernist notion that form follows function through expression, some architects were already keen to combine old styles with modern technology, other less so.

But contrasting opinions were eclipsed by growing concerns about energy and its dangers – carbon emissions in particular. Today we think very differently about how we produce and consume energy.

The modern environmental engineer has a moral as well as technical role to play.

We need to respond to global conditions, not simply make individual buildings work.

Our founder Patrick Bellew and structural engineer Neil Thomas first rubbed shoulders as fresh graduates in the 1980s when the pace of environmental change was increasing. Those intense conversations revealed a shared desire to bring new thinking to design, to push the possibilities of integrating environment and structure.

For those who don’t know, the word atelier is French for ‘workshop’. We’re always keen to work at solving problems, whatever the scale. We work to make even the most ordinary projects better than they might have been. And we’ll continue to work at the forefront of environmental design.

Working with architects who viewed the relationship between architecture and environment as much more than skin deep, they saw opportunities for doing more with less.

That instinct still infuses everything we do today.

Over the years the team has worked across the UK and extensively abroad, partnering with great architects, engineers, artists and clients along the way. The practice remained London-based until we opened our New York office in 2001. We’ve since built up a worldwide network hand-in-hand with a reputation as inventive collaborators in high-performance green building design.

Since we began, environmental concerns and sustainability have become central to every project at every scale. And in an industry that’s mostly slow-moving and risk-averse, many ideas and techniques we’ve pioneered have now become mainstream. For this, we owe due thanks to our clients.

At the end of 2020, Atelier Ten joined the Surbana Jurong Group, a global consultancy in urban and infrastructure development headquartered in Singapore. We are a distinct member company within the Group, and by joining forces we are deepening our expertise and strengthen our commitment to championing sustainability and developing climate change solutions.

Working with Surbana Jurong and other members of the Group we are extending our mission to the next 30 years to become a global force for good in the drive towards a more sustainable world.

No more pages to load