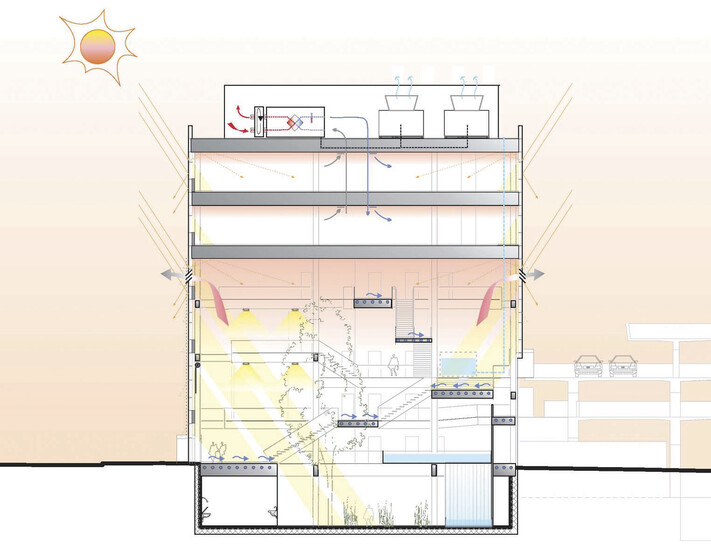 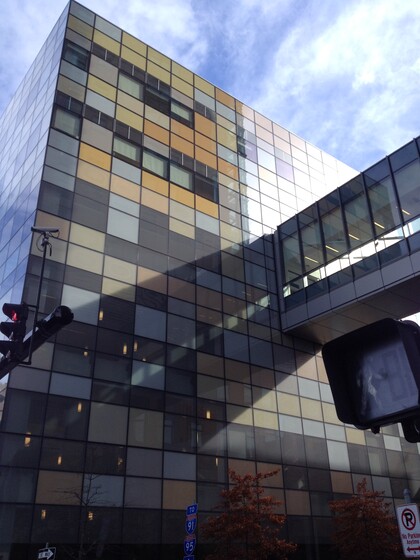 Prominently situated in New Haven’s downtown, this project distinguishes itself with an innovative facade design that utilizes Okalux translucent insulation. 55 Park Street is one of the first buildings to do so in the United States.

Atelier Ten’s lighting design for the complex lobby focuses on highlighting the plant life stationed at every level. By using high-intensity lighting to ensure plant survival as the key illumination, the whole space becomes a sculpture garden for the greenery. The addition of glowing cylindrical “windchimes” above the staircase turn the lobby into an inviting and contemplative feature space in the Yale New Haven Hospital district. Atelier Ten’s lighting design for the core and shell is integrated with this daylight strategy, significantly reducing energy loads associated with lighting.

The atrium-lobby, a major design feature, increases the connectivity of the building to the adjoining Smilow Cancer Hospital and pedestrian bridge, as well as to the surrounding and vibrant neighborhood. While the east-west orientation of the atrium-lobby makes the space susceptible to substantial solar heat gain, the façade design, which uses Okalux translucent insulation, significantly reduces those heat gains.

Atelier Ten also worked closely with the engineers on a comprehensive mechanical systen design which is more efficient than typical hospital administration buildings.