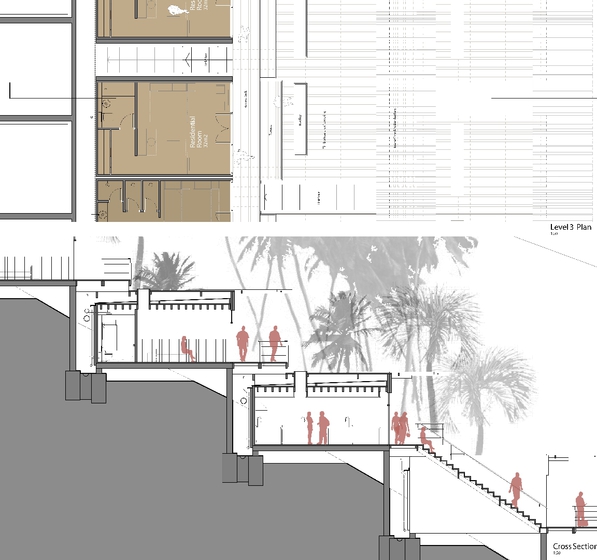 The Atelier Ten Foundation supported me and my colleague Ed Cremin in our work with the charity LABS Montserrat. The charity is in the early stages of development and the Foundation was able to give us a vital opportunity in making the next steps in getting LABS Montserrat off the ground. The foundation covered the travel costs of a trip to Montserrat, West Indies for us to meet with various officials, masterplanners, ministers and potential users to confirm its position on the Masterplan for the new capital town of Montserrat and in the psyche of residents and scientists.

LABS Montserrat was set up as a result of a single desire to conserve Montserrat’s endangered and indigenous species. Montserrat is a uniquely beautiful island in the Lesser Antilles, Caribbean and has fallen into the shadow of its volcano, since it began erupting in 1995. The island was caught off-guard with an unexpected eruption of ash and pyroclastic flows from the volcano long thought dormant. The eruption buried the once thriving capital town in ash and endangered many species of flora and fauna, some of which are unique to the region and some are endemic to Montserrat.

After studying the most viable way to carry out and maintain vital conservation of Montserrat’s ecosystem I presented the design proposal of laboratories, teaching facilities and accommodation to the Chief Minister, Hon. Reuben Meade. Well received by the Chief Minister, I was invited back to present the proposal at an International Design Charette looking at the masterplan of the new capital town, Little Bay. For a second time the proposal was well received gaining formal endorsement by planners, architects, ministers and locals. A few months and drawings later, it received outline planning permission. The underlying driver of the proposal is not just to conserve the flora and fauna but also to sustain the island for future generations while harnessing the natural resources that are in abundance and positively feeding back to the surrounding island.

Scientists currently on the ground consist of conservationists from Kew Gardens, Jersey Zoo, RSPB, Durrell Foundation and the National Trust. The work they carry out involves monitoring species from turtles to birds and even a large frog known locally as the Mountain Chicken. They take samples and dissect animals, but with no laboratory facilities currently on the island this means sending items abroad, leading to the degradation of samples, and having to dissect frogs in a domestic kitchen.

If the use of the proposed laboratory means I don’t have to dissect frogs on my kitchen counter, it will make my husband very happy.
Sarah-Louise Adams, Durrell Foundation

The initial Foundation funding was to support my key objectives; to secure a site for the project, to maintain its reputation as part of the Little Bay masterplan and submit a detailed planning application. A number of meetings with the Montserrat Development Corporation [MDC] led to agreement on a site. And a series of pre-planning meetings with Government Ministers and Planning Officers smoothed the planning process. One of the key meetings was with the Head of Water Infrastructure on the island to discuss the scheme. He was very impressed with our overall strategy to reduce water use, and was pleased to see how ambitious we have been. It was noted that Montserrat currently has ample water to support the current and future populations. Despite this, he was excited about Montserrat showcasing an exemplary project that utilised water reduction strategies, and was keen to collaborate and provide support where necessary.

We also discovered that the island currently has huge issues with energy security and spiralling costs. Investment in geothermal energy is being pursued in the volcanic exclusion zone, where signs are promising to provide enough electricity to power the entire island and to export to neighbouring Caribbean islands. The current costs of a unit kWh of electricity is 3-4 times as much in the UK. If successful the geothermal energy will provide us with us 100% renewable electricity for the development.

Since the trip, I have appointed an award-winning architect to carry the designs through to detailed planning. Also, a group of students from Manchester School of Architecture have used the design proposal as their final year project on their Masters in Architecture programme. This involved me attending their studio for a series of design tutorials. We also offered them all the chance to attend a design charette at our offices for them to get design input and advice from a selection of our senior engineers and members of our PTEN (young engineers) group.